I want to go!
Navagio is located on the north-west shore of the Ionian island of Zakynthos (Zante), in the Municipality of Elation. The area is defined by its sheer limestone cliffs, white sand beaches, and clear blue water, which attract thousands of tourists yearly. The strip of beach is accessed only by boat, from Porto Vromi to the south, and from the Harbor of Saint Nikolas in Volimes to the north-east. More typically, boats arrive from the harbor of Zakynthos, the capital city, with cruises and tours anchoring hourly at Navagio.My friend Sam jut got back from there
The color of the water unique. its story also unique. reached only by boat. very deep waters. not organised beach. water, hat, photo camera, sun block cream, sunglasses are needed for every visitor" he said
he told me
When I went to the Shipwreck, which I believe was before it became a big attraction thanks to internet attention our ship did not go ashore. We were told that the weather did not permit it. Meanwhile a few other ships did go to the shore and people were let out. 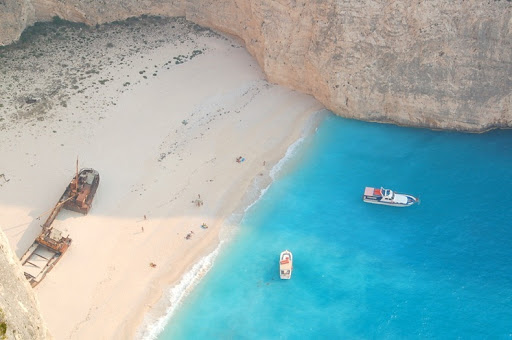 The ship itself is also kind of silly. It's not like some old beautiful Wooden Ship or even a passenger vessel from back when it was glamorous, it's a Cargo ship that sank back in the 80's but I loved it :)

Navagio Beach or the Shipwreck, is an isolated sandy cove on Zakynthos island and one of the most famous and most photographed beaches in Greece. Navagio Beach is often referred to as the Shipwreck Beach or just simply “The Shipwreck” because it is home to the wreck of a ship called Panagiotis that is believed to have been a smugglers ship. The presence of alleged smugglers ship gave Navagio Beach yet another nick name – Smugglers Cove. Category :   Travel More : #Navagio #beach #GreeTake #there #please
Previous
1
Next
Next
Previous